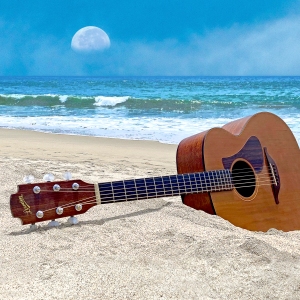 Clicking on this image is a link to hear my piece on Insight Timer.

The 4-chord melody for Guitar Tides was composed last year. I put it aside when I couldn’t seem to expand it beyond those chords. Instead, I found myself energized to work on “Autumn Hope” so I discarded those 4 chords in the key of A.

Once “Autumn Hope” was finished, I wondered whether I had another guitar instrumental in me. I went back to play those 4 chords and felt inspired to add a few more bars. As more and more passages were revealed, the song expanded beautifully. I didn’t have any idea what to name it, so for 6 months, I called it my “new piece in the key of A.”

It took patience for me to decide when my song was truly finished. Eventually, it felt complete and I recorded the main guitar part in August. But it still wasn’t done. I wanted to explore guitar additions. In the past, my other guitar part usually consisted of light finger-picking and an occasional soft strum.

I went ahead and recorded those additions by transposing and using a capo, but then I improvised and came up with some catchy lead guitar melodies. With my last piece “Autumn Hope,” I had discovered the beauty of adding harmonics, so I recorded lots of tracks with those, as well.

Culling the best parts from all the additional guitar recordings was a monumental editing task. But I loved it! The finished piece even benefited from a creative introduction, which had the guitar additions playing first without the main guitar. I faded it in and the result was fun. And of course, once I chose the name “Guitar Tides” – I thought adding some ocean sounds for the intro and the outtro would be soothing.

I had a lovely beach outing this past summer, which inspired me to take some pictures of my guitar on the sand. My good friend, Joni, accompanied me and also took some pictures of me. Everything came together and I’m so happy that I have finished and released my latest guitar creation. 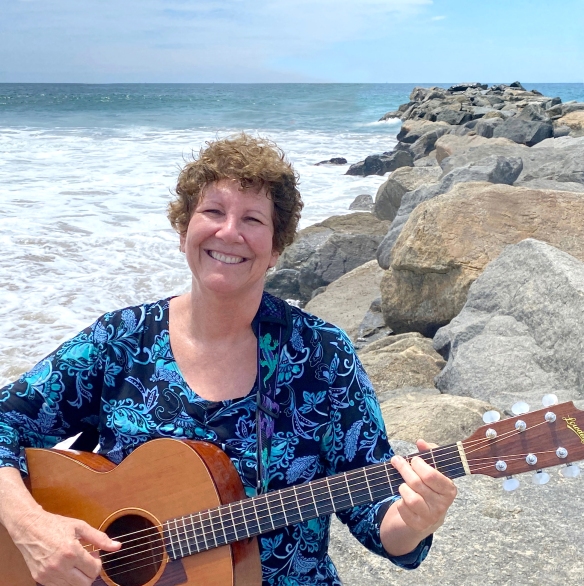 I am planning to add a portion of Guitar Tides to an existing track named “Healing Guitar Dreams.” The moon on my song cover is very dreamy. I’m going to use a different view and change the name of that track to “Guitar Dreams.” It will consist of 5 guitar songs. That will be coming soon.

Beside Me Always Book 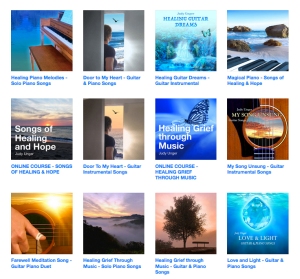 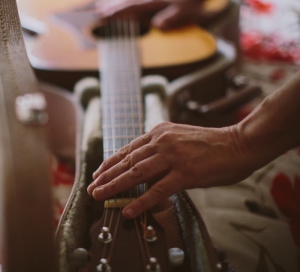 © Judy Unger and judyungermusic.com 2022. Unauthorized use and/or duplication of this material without express and written permission from this blog’s author and/or owner is strictly prohibited. Excerpts and links may be used, provided that full and clear credit is given to Judy Unger with appropriate and specific direction to the original content.